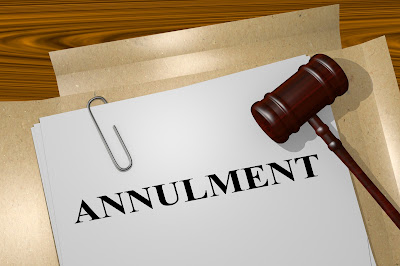 An annulment is a declaration by the circuit court that there is a defect in the marriage such that the marriage is void. Contrary to popular belief, you cannot have your marriage annulled because you did not consummate the union or because you changed your mind shortly after the ceremony. To qualify for an annulment there must be a defect which goes to the heart of the marriage. If the marriage is valid, the only recourse is to file for divorce. A divorce dissolves a valid marriage, whereas an annulment recognizes and declares a marriage to be so defective as to be non-existent.

Void Marriages~The following marriages are void from the start and consequently not recognized at law: 1) marriage to someone who is already married and 2) marriage to a close relative. Under these circumstances, the marriage is void from the start. Either party may petition the court for an annulment. There is no limitation as to when the suit may be filed. It is important to note that if one party was married to someone else at the time of the marriage, the subsequent death of the other spouse or the subsequent divorce from that spouse will not validate the marriage. The only way to validate the marriage in such a case is to remarry after the problem has been resolved.

Unlike void marriage, courts will not grant an annulment of a voidable marriage if the spouses continue to cohabit or live together as husband and wife after discovery and knowledge of the circumstances constituting grounds for the annulment. If there is cohabitation with knowledge of the circumstances or if you have lived with your spouse for two years or more before filing a petition for annulment, you will be required to file for a divorce instead of an annulment. We had the unpleasant task of telling a man who had been married five years that although he had grounds to annul his voidable marriage, he waited too long to file for an annulment. He had to file for divorce.

The Procedure~The procedure for an annulment is the same as for a divorce. The only procedural difference is the grounds for the lawsuit. However, the relief available in an annulment is different than in a divorce.

The Relief~While the court may make a temporary order for spousal support and attorney's fees, during the pendency of the annulment suit, the court has no authority to grant post-annulment "spousal support" or equitable division of property and debts. If there are children, the court may rule on custody and child support, even if the marriage is void.