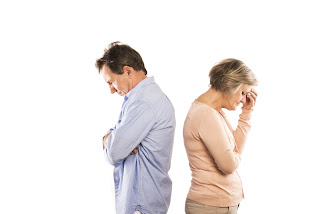 Before the late 1960s, nearly all countries that permitted divorce required proof by one party that the other party had committed an act incompatible with the marriage. This was termed "grounds" for divorce (popularly called "fault") and was the only way to terminate a marriage. In the United States, no-fault divorce is available in all 50 states, as is the case with Australia, New Zealand, Canada and other Western countries.
Fault-based divorces can be contested; evaluation of offenses may involve allegations of collusion of the parties (working together to get the divorce), or condonation (approving the offense), connivance (tricking someone into committing an offense), or provocation by the other party. Contested fault divorces can be expensive, and not usually practical as eventually most divorces are granted. Comparative rectitude is a doctrine used to determine which spouse is more at fault when both spouses are guilty of breaches.
The grounds for a divorce which a party could raise and need to prove included 'desertion,' 'abandonment,' 'cruelty,' or 'adultery.' The requirement of proving a ground was revised (and withdrawn) by the terms of 'no-fault' statutes, which became popular in many Western countries in the late 1960s and early 1970s. In 'no-fault' jurisdictions divorce can be obtained either on a simple allegation of 'irreconcilable differences,' 'irretrievable break-down', or 'incompatibility' with respect to the marriage relationship, or on the ground of de facto separation.
Read more, here.
1371-C Oliver Road
Fairfield, California 94534
By Phone: 707.428.9871
By Fax: 707.428.9873
By Email: btpfairfield@sbcglobal.net
Website
Posted by Rene at 3:30 AM