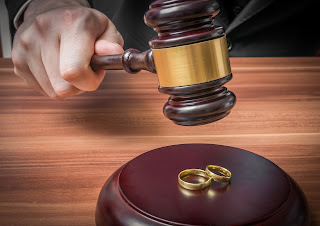 In some jurisdictions, the courts will seldom apply principles of fault, but might willingly hold a party liable for a breach of a fiduciary duty to his or her spouse (for example, see Family Code Sections 720 and 1100 of the California Family Code). Grounds for divorce differs from state to state in the U.S. Some states have no-fault divorce; some states require a declaration of fault on the part of one partner or both; some states allow either method.
In most jurisdictions, a divorce must be certified (or ordered by a Judge) by a court of law to come into effect. The terms of the divorce are usually determined by the courts, though they may take into account prenuptial agreements or post-nuptial agreements, or ratify terms that the spouses may have agreed to privately (this is not true in the United States, where agreements related to the marriage typically have to be rendered in writing to be enforceable). In the absence of agreement, a contested divorce may be stressful to the spouses.
In some other countries, when the spouses agree to divorce and to the terms of the divorce, it can be certified by a non-judiciary administrative entity. The effect of a divorce is that both parties are free to marry again if a filing in an appellate court does not overturn the decision.
Read more, here.
1371-C Oliver Road
Fairfield, California 94534
By Phone: 707.428.9871
By Fax: 707.428.9873
By Email: btpfairfield@sbcglobal.net
Website
Posted by Rene at 5:00 AM