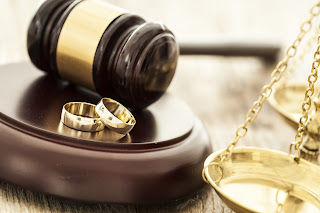 Divorce (also known as dissolution of marriage) is the process of terminating a marriage or marital union. Divorce usually entails the canceling or reorganizing of the legal duties and responsibilities of marriage, thus dissolving the bonds of matrimony between a married couple under the rule of law of the particular country or state. Divorce laws vary considerably around the world, but in most countries, divorce requires the sanction of a court or other authority in a legal process, which may involve issues of distribution of property, child custody, alimony (spousal support), child visitation / access, parenting time, child support, and division of debt. In most countries, monogamy is required by law, so divorce allows each former partner to marry another person.
Divorce is different from annulment, which declares the marriage null and void, with legal separation or de jure separation (a legal process by which a married couple may formalize a de facto separation while remaining legally married) or with de facto separation (a process where the spouses informally stop cohabiting). Reasons for divorce vary, from sexual incompatibility or lack of independence for one or both spouses to a personality clash.
The only countries that do not allow divorce are the Philippines and the Vatican City. In the Philippines, divorce for non-Muslim Filipinos is not legal unless the husband or wife is an undocumented immigrant and satisfies certain conditions. The Vatican City is an ecclesiastical state, which has no procedure for divorce. Countries that have relatively recently legalized divorce are Italy (1970), Portugal (1975, although from 1910 to 1940 it was possible both for the civil and religious marriage), Brazil (1977), Spain (1981), Argentina (1987), Paraguay (1991), Colombia (1991; from 1976 was allowed only for non-Catholics), Andorra (1995), Ireland (1996), Chile (2004) and Malta (2011).
Read more, here.
1371-C Oliver Road
Fairfield, California 94534
By Phone: 707.428.9871
By Fax: 707.428.9873
By Email: btpfairfield@sbcglobal.net
Website
Posted by Rene at 5:00 AM